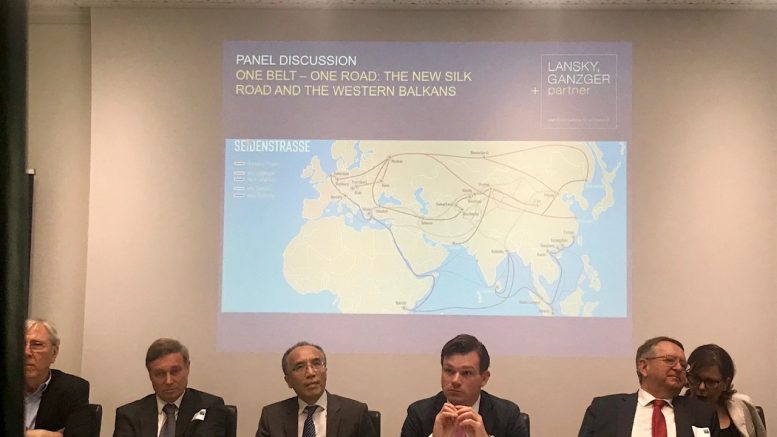 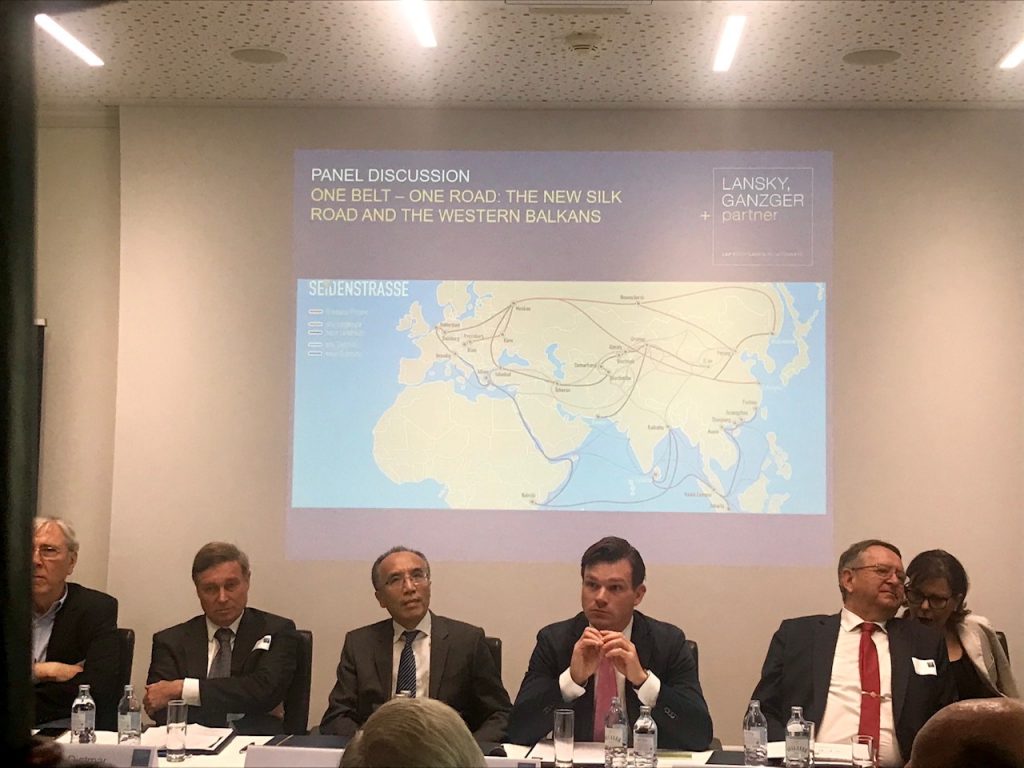 On 6. June, LGP (Lansky, Ganzger+Partner), a very well-known law firm with its headquarter in Vienna, Austria, held a panel discussion on the topic of “ One Belt –One Road and the Western Balkans”.  And I was there.

Ambassadors from China, Eritrea, Kazakhstan, Croatia, Mongolia, Montenegro, North Macedonia, the Russian Federation, as well as the representatives of the EU, the OSCE and the Austrian ministries attended the afternoon activity which turned out to be a well-discussed, insightful and significantly meaningful event.

Two panelists recently have their new book on the subject of China with its BRI (Belt Road Initiatives) published. While Mr. Fitztrum showed enough positive confidence in China with his book “China Verstehen”(Understanding China), Mr. Sommer in his book “China First” summarized his view of China with the words “Let’s treat China without illusions, but also without obsessions.”

With the 2019 “EU-China: A Strategic Outlook” against the backdrop of China’s growing economic power and political influence out in March, the European Commission and the High Representative intend to review European Union-China relations and the related opportunities and challenges. Hence the intensified discussions about the influence (or consequences) of China’s BRI in Europe.

I noticed that the questions raised by the crowd showed big concerns or worries about geo-political situations around the worldwith China’s rising up. The questions , not without challenging attitude or even hostility, covered those of the relationships between China and the Balkan countries, China and Russia, China and the USA, and between China and Pakistan, ect.. Moments of stirred-up sentiments could be felt in the air.  The panellists also held their views from different perspectives, “China is for long a powerhouse”,  “The naïve phase of Europe should be over”,  “Cooperate where we can, protect where we must”,  “China’s win-win is probably we win it all”,  “Should Austria shop the energy in East Europe or in Trieste, Italy?”, to quote a few words.

Needlessly to say, China’s Ambassador to Austria Mr. LI Xiaosi faced a pile of not necessarily pleasant questions. But it was to my joy to observe how he stayed calm and sincere, explaining the real situation in China, asking for mutual friendliness and understanding in order to keep a peaceful world by continuing the cooperation with each other in the future.

China is not a developed country yet. And the Chinese mentality is not in for the position as a superpower at the cost of other country’s interests, let along triggering a new cold war. These should be better understood by the world, in my humble opinion. 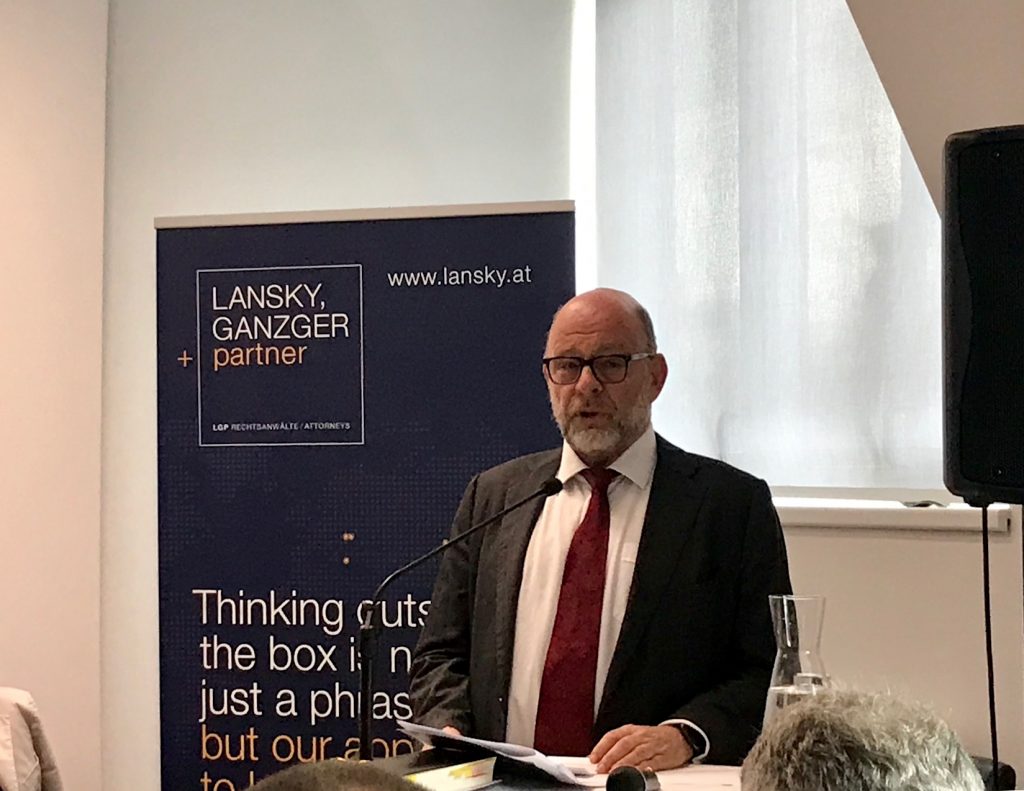 In his opening speech, Dr. Gabriel Lansky, managing partner of LGP, gave a brief introduction to his law firm by stressing its broad expertise in all aspects of transport infrastructure, in the areas of road, rail and aviation, various facets of the energy industry and telecommunications. Besides, the firm has a strong focus on Eastern and Southeastern Europe as well as the CIS countries – all key focuses of the Belt and Road Initiatives. The firm’s China Desk provides comprehensive support to Chinese and international clients in all areas of law.

Dr. Lansky mentioned the book by Frank Siren: “Future? China!” Siren lives since 1994 in Beijing as a correspondent for the Süddeutsche Zeitung, Die Zeit, Der Spiegel, Deutsche Welle and the Handelsblatt. In his book, Mr. Siren points out that within Europe, the focus of the BRI is on Central, Eastern and Southeastern Europe, with a particular focus on the so-called Western Balkan states in former Yugoslavia. That region lies between the Greek port of Piraeus – which in 2016 was 67% owned by the Chinese state-owned company COSCO – and the key markets of Western Europe.

The European Investment Bank and the Vienna Institute for International Economic Studies estimate that Chinese infrastructure investments in the Western Balkans region amount to around 7.8 billion Euros. Of all Chinese BRI investments in Europe, almost 30% is accounted for by Serbia alone, with another 20.7% going to Bosnia-Herzegovina and 7.4% to Montenegro. Nevertheless, the EU remains by far the most important partner for the economies of the Western Balkans.

Not only Beijing plans to expand these infrastructures, the EU also sees them as a key priority for the region’s economic and political stability, which should boost economic growth and contribute to economic integration in the Western Balkans.

Mentioning the above facts, Dr. Lansky came to his following well-thought, eye-opening hypothesis:

BRI is not a threat to the EU.

Beijing has launched the new Silk Road as a geo-economic project to expand trade networks. Ensuring the unimpeded flow of raw materials and export goods is a central public interest of the world’s largest exporter of goods.

China has absolutely no interest in weakening the European Union, least of all right now as it finds itself in an escalating trade dispute with the United States. On the contrary, Europe is one of China’s most important markets and plays an important role in its vision of a multipolar and multilateral world order.

Of course, there are still disagreements between Brussels and Beijing – for example, in terms of aspects of Chinese lending practice or in what form of energy is being invested. However, these should be regarded as subordinate in view of the predominantly shared objectives.

The EU frequently criticizes Chinese investment for suspending European public procurement law – but it should not lose sight of the fact that the countries of the region are not EU members and that their existing member states do not signal their hopes for a speedy uptake. Under these circumstances, it is not surprising that compliance with European regulations is not a top priority in the capital cities of the Balkans. However, the existing constellation provides an excellent starting point for a win-win-win situation in which all the players involved benefit: the EU, China and the Western Balkan states.

Dr. Lansky stressed that against the background of President Trump’s trade wars, an open confrontation between Brussels and Beijing would be fatal. The world economy is on shaky ground: The upswing in the US is being financed by an exploding deficit; The ECB has not turned off the money in time and thus has no room for monetary policy in the next downturn; global trade and the stock markets are tense against the background of Trump’s trade wars.

There is a real danger that the escalating trade disputes will lead to a collapse of the multilateral rule-based global economic order that has been carefully constructed over the past 70 years. An open confrontation of Trade and investment between the EU and China has the potential to become a catalyst for this development and jeopardize the stability and peace between the major powers. Brussels and Beijing, the leading economic powers, must thus do everything in their power to save, and to improve, the open global economic order.

Europe is the “country in the middle” and has to come to terms with the US and China. That’s the right way, but not an easy one, said Dr. Lansky. Coordination between Beijing and Brussels in the Western Balkans can be an important confidence-building measure between the two sides and contribute to deepening cooperation in other areas. In the Western Balkans region, cooperation should be comparatively easy in the face of broadly consistent goals and interests. And a successful model of coordination and cooperation can contribute to confidence building and, ideally, be transferred to other areas. Resilient coordination of interests and initiatives is central to coping peacefully with the coming shifts in economic and political powers in the Pacific and in a multi-polar 21st century.

Dr. Lansky pointed out that the EU is too hesitant. “China needs us less than we need China”, he said.

Recently, China’s President XI Jinping announced that it would open BRI co-financing projects. “The EU should make use of it! “ according to Dr. Lansky.

Quoting Frank Siren, who is calling for a European Silk Road Fund worth EUR 30 billion, Dr. Lansky ended his speech by asking the EU to join in Beijing’s Silk Road vision and ensure that European interests are taken into account in the implementation.

Be the first to comment on "Is BRI a Threat to the EU?"