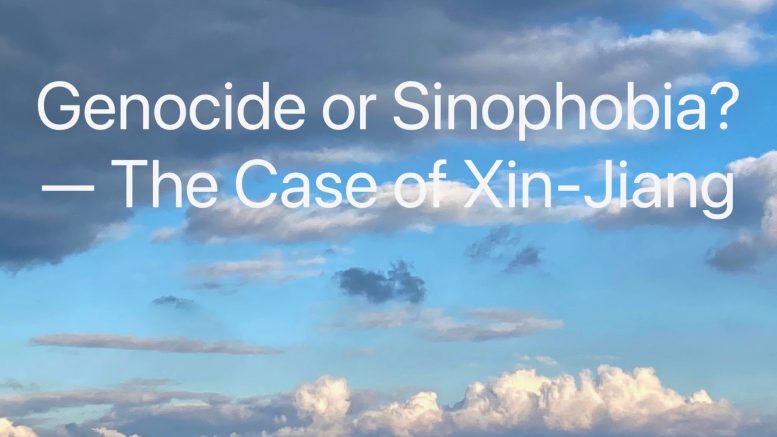 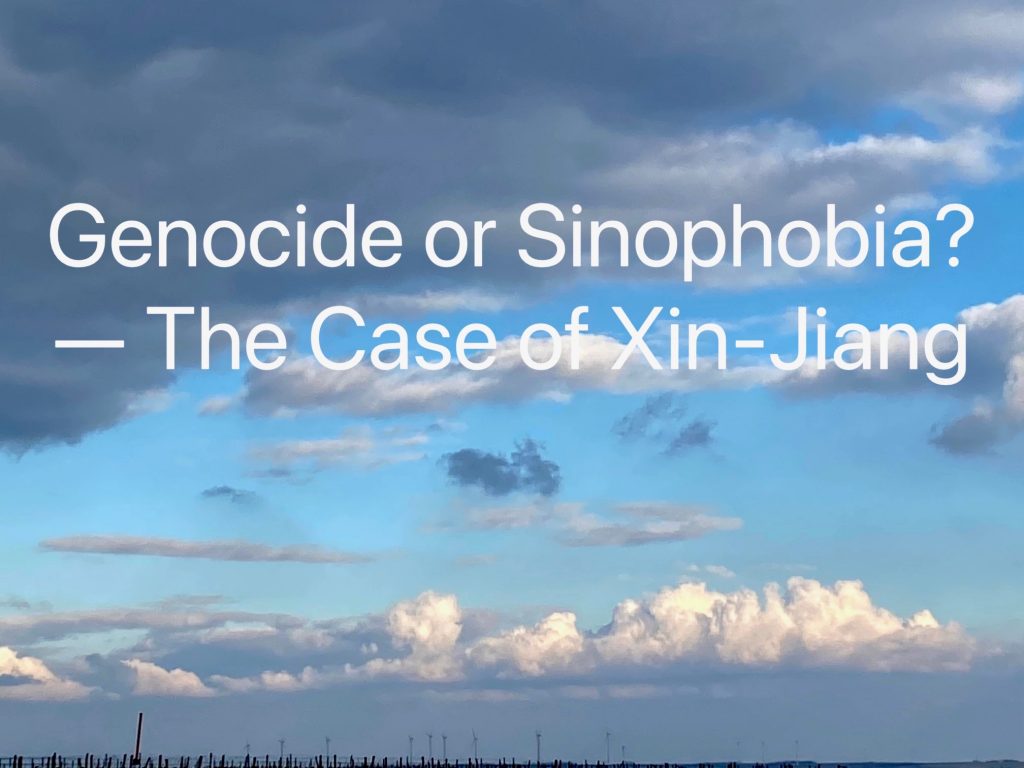 A so-called Uyghur Tribunal was launched in 2020 in United Kingdom by Sir Geoffrey Nice­, the lead prosecutor for the International Criminal Tribunal that tried Slobodan Milošević’s war crimes in the former Yugoslavia based on the genocide allegations against Uyghur, Kazakh and other Muslim minorities in the Peoples Republic of China (PRC).  Sir Geoffrey Nice, on 9 December 2021 claimed to have found out a genocide. Reading the Tribunal’s so-called judgement, Sir Geoffrey said there was “no evidence of mass killings” in Xin-Jiang, but he said that the alleged efforts to prevent births amounted to genocidal intent.

Article II of the UN Convention on the Prevention and Punishment of the Crime of Genocide (Genocide Convention) in 1951 contains the definition of genocide and therefore forms the “heart” of the Convention’s regime. Among the reasons the crime of genocide is called the “crime of crimes” is its special intent, dolus specialis. “Genocidal plan” to destroy as written in Article II. Genocide has two main players, i.g. the ones who elaborate the genocidal plan, the mens rea (“criminal mind” in Latin) and the ones who carry out the killings and other crimes that make up the actus reus (“guilty act” in Latin) of genocide. The actus reus of genocide is making the transition of the genocidal plan, intent to the result of a genocide. The genocidal plan is defined as “intent to destroy in whole or in part, a national, ethnical, racial or religious group,” in Article II of the Genocide Convention. If there is no mens rea or intent to destroy, there is no genocide but other kinds of actus reus, atrocity crimes like war crimes or ethnic cleansing.

According to the so-called Tribunal, it is satisfied beyond reasonable doubt that the PRC, by the imposition of measures to prevent births intended to destroy a significant part of the Muslim minorities in Xin-Jiang as such, has committed genocide, an extent by birth control and sterilization. To prove a genocide is being committed, the so-called Tribunal has defined “intent” (dolus special) the mens era in the section “Was There a Plan” as:

“Intermittent and fluctuating tension between the indigenous people in the region including the Uyghurs and Han-centric China intensified in 2014 following the spilling out of violence into ‘mainland’ China. The CCP launched the ‘War on Terror’ the purpose of which was to eradicate the perceived security threat posed by its Muslim minority population but also to transform the region into a more integrated part of China for, amongst other purposes, economic benefit.”

The wording “but also to transform the region into a more integrated part of China for, among other purposes, economic benefit” is an open violation of the UN Charter in different senses. Xin-Jiang is a territory of China. In order to prove an intent for committing genocide, the so-called Uyghur Tribunal used some word games on the assumption that as if Xin-Jiang is outside the PRC, and it defined the economic integration of Xin-Jiang with other parts of China as a crime. The integration of the economies of different regions of China is a solely a domestic matter of China, and it is a right of the Chinese people to be developed and integrated.  In Article 2.7 of the UN Charter, it is written that “nothing contained in the present Charter shall authorize the UN to intervene in matters which are essentially within the domestic jurisdiction of any state”. The so-called Tribunal even raised itself above the UN Charter, within the meaning of legibus solutus, not bound by law, which is a clear violation of the UN Charter by the so-called tribunal.

The “Plan”, as described in the so-called judgement, was already made public for years by the PRC, nothing is secret about it. The “Plan” that the Tribunal claimed to find out is just the Sustainable Development Goals (SDGs) of the PRC.  SDGs, also known as the Global Goals, were adopted by the UN in 2015 as a universal call to action to end poverty, to protect the planet, and to ensure that by 2030 all people enjoy peace and prosperity. The 17 SDGs are integrated—they recognize that action in one area will affect outcomes in others, and that development must balance social, economic and environmental sustainability. The SDGs are designed to end poverty, hunger, AIDS, and discrimination against women and girls. PRC’s SDGs also include 27 minority areas, such as Yunnan, Qinghai, Xin-Jiang and Inner Mongolia, in an effort to create new job opportunities and alleviate poverty through the combination of traditional and innovative practices. The so-called Tribunal has defined the SDG of the PRC and also itself above the UN by rejecting the SDGs of the PRC.

The Tribunal has thus objected the right to development of Chinese minorities which is a universal human right. In its so-called judgment, in the section “Was There a Plan”, the Tribunal defined the minorities of the PRC as indigenous peoples. By declaring the minorities of the PRC as the indigenous peoples, the so-called Tribunal has justified itself by being obliged to take into account two Declarations of the UN General Assembly: the Declaration on the Rights of Indigenous Peoples and the Declaration on the Rights of Persons Belonging to National or Ethnic, Religious and Linguistic Minorities in its judgement. The Declaration on the Rights of Indigenous Peoples does not introduce any special rights for indigenous communities other than the majority and clarifies how those rights apply to Indigenous peoples given their “specific cultural, historical, social and economic circumstances. Both declarations aim to achieve equality and prohibit discriminatory policies of the States among its citizens. Equality and non-discrimination are significant objectives of the Declarations.

If there exists a discriminative policy of the CPR for the birth control and sterilization among its citizens, the Tribunal’s finding of the “intend” could be named as a legal finding and can be claimed that PCR commits genocide against its indigenous population of Uyghur, Kazakh and other Muslim minorities. Here one needs to prove if the so-called Tribunal fulfilled its responsibility of the due diligence standard obligations as written in the Genocide Case of the ICJ.

In the jurisdiction of the Tribunal, even if the wording “birth control” is used ten times, there is no mention of any discriminatory birth control policy of the PCR among its citizens and especially among Uyghurs, Kazakhs or other Muslim minorities. The implementation of the universal family planning policies for all ethnic groups: two children per couple for urban residents and three per couple for rural residents from 2017 can never be defined as a discriminative policy of the State. If there is no discrimination in the family planning in Xinjiang or in all the territories of the PRC, no one can claim neither any intent, mens rea nor act actus reus to commit genocide.

In the jurisdiction of the so-called Tribunal, the wording “sterilization” has been used six times. There is but no mention of any discriminatory sterilization policy of the PCR among its citizens and especially among Uyghurs, Kazakhs or other Muslim minorities.  If sterilization is to be used as evidence for genocide, first the so-called Tribunal had the obligation to prove discriminative policies of the PRC against its own Family Planning Policy against the Uyghur, Kazakh and other Muslim minorities to prevent the urban residents from having two children per couple, and those in farming and pastoral areas from having three children. But the so-called Tribunal failed to do so and did not even give one real example. If there is no discrimination in the sterilization policy in Xin-Jiang or in all the territories of the PRC, than no one can claim neither any intent, mens rea nor act actus reus to commit genocide.

The PRC has an almost non-discriminative birth control and sterilization policy within the 56 ethnic groups living in China (with the exception of Tibet). The proof of non-discriminative policy nullifies the genocidal claims of any group against China. To prove a genocide against the Uyghurs, Kazakhs and other Muslim minorities, based on birth control and sterilization, one first needs to prove a discriminative policy of the PRC against the targeted groups. Without proof of a discrimination policy, no one can claim the intent (mens rea), or act (actus reus) required for committing genocide. The so-called Tribunal failed to fulfill its responsibility under the international due diligence standards. This failure should be investigated by our brains if it was on purpose or not. The non-legality of the so-called judgement of the so-called Tribunal is supposedly an answer to the question of whether it is merely an instrument of a political strategy against the PRC. The non-legality of the judgement of the so-called Tribunal with false allegations are amounted to hate speech under the definition of Sinophobia as the so-called Tribunal had violated the UN Charter, Declarations, and the Genocide Convention in its judgement in many aspects to achieve its political goal to prove a so-called genocide.

The so-called unlawful decision of the Court, on the other hand, proves once more that the PRC does not commit genocide against the Uyghur, Kazakh and other Muslim minorities in Xinjiang.

Abou the author: Prof Dr h.c Mehmet Şükrü Güzel is President of Center for Peace and Reconciliation Studies in Switzerland

This publication is a shortened version of Prof. Güzel’s original article with the title of “The Proof of No Genocide Committed in Xin-Jiang against the Uyghurs”.

Be the first to comment on "Genocide or Sinophobia? The Case of Xin-Jiang"