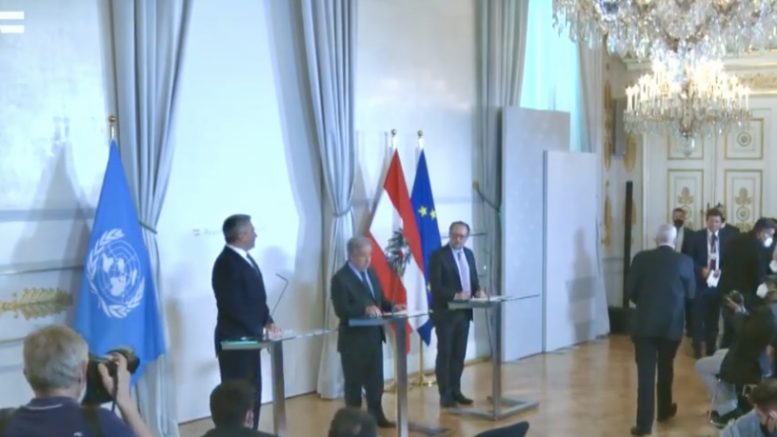 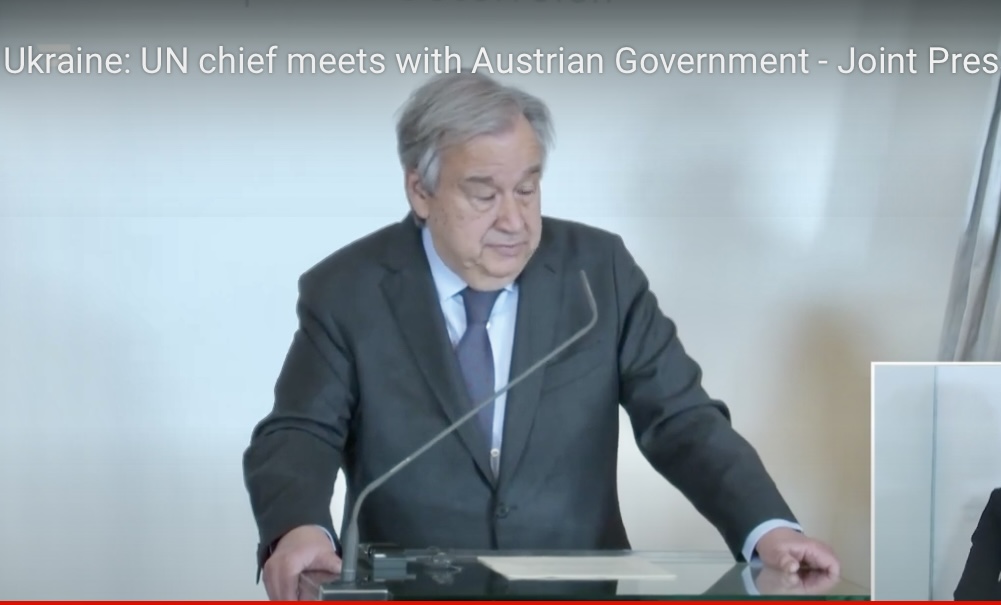 On 11, May, during his visit in Austria, the UN Secretary-General António Guterres’ made remarks at Joint Press Conference with the Austrian Federal Chancellor H.E. Karl Nehammer and the Foreign Minister H.E. Alexander Schallenberg:

Chancellor Nehammer, ladies and gentlemen of the press, Minister Schallenberg, I want to begin by expressing my deep gratitude for your country’s generous support to the United Nations and unwavering commitment to multilateralism.

This support and commitment are more critical today than ever.

We face multiple and interlinked global crises, and a proliferation of conflicts – not least the Russian invasion of Ukraine which is a violation of its territorial integrity and a violation of the Charter of the United Nations.

I have been particularly concerned by strikes on urban centres and their impact on civilians, like we have just witnessed on Odesa.

The war must end for the sake of the people of Ukraine, Russia, and the entire world.

We need to build a world of respect for international law and the UN Charter, a world that protects civilians and offers them a peaceful future on a healthy planet, a world that advances human rights, a world where leaders live up to the values that they have promised to uphold.

The United Nations remains intensely focused on ways to expand support for the people of Ukraine, saving lives, reducing suffering, and helping find the path of peace.

We will keep pushing for a full-scale ceasefire, effective humanitarian corridors and safe passage for civilians and life-saving supplies, building on what, together with the International Committee of the Red Cross and the parties, we were able to do in Mariupol.

Meanwhile, we have mobilized to prevent the worst impacts of the war beyond Ukraine’s borders – including containing the spectre of regional escalation.

But Moldova is fragile and facing interlocking crises, from COVID-19 to security, from high inflation caused by skyrocketing prices of food and energy to the blockage of its traditional trade routes, namely Odesa.

In this context, I appeal to the international community, and I take profit of being here, and in particular to the European Union, to provide massive support, including budget support, to help preserve Moldova’s stability and pursue its ambitious reform agenda.

We must also work together to protect refugees from human trafficking, gender-based violence, and other forms of abuse.

I thank Austria for welcoming those fleeing violence in Ukraine, for your humanitarian assistance both through the European Union and bilaterally, and for your support to UN action across the world.

Before Moldova, I was in Senegal, Niger and Nigeria where they – like developing countries everywhere – are reeling from the cascading challenges of an unabated climate emergency, an uneven recovery from the COVID-19 pandemic, and a triple crisis of food, energy and finance exacerbated by the war in Ukraine.

I have to say that I am deeply concerned hunger namely with the risk of hunger becoming widespread in different parts of the world because of the dramatic food security situation we are facing because of the war in Ukraine.

It is my belief that, independently of many other solutions that deal with the need to keep markets open, to avoid export bans, to do everything to interfere in the markets to keep prices as low as possible, I do believe that there is no solution to the problem without bringing back to the markets the food production of Ukraine and the food and fertilizer production of the Russian Federation and Belarus.

For my part, as I said this morning with His Excellency the President, I will do everything I can to facilitate the dialogue that can lead to results in this respect.

It is encouraging to know that – even at this moment of great difficulty – we have steadfast allies in our quest for multilateral solutions.

Austria – as a bridge-builder between East and West and a generous host of many United Nations organisations – is such an ally.

I always hear from colleagues working in Vienna that the conditions created by the Austrian authorities are so favourable that many decide to retire and go on living here.

I think this is the best testimony to the fantastic hospitality of our host city and host country.

For all of that, I am extremely grateful, and I look forward to deepening our strong partnership.

Many decades ago, looking back on his life after he was forced to flee his beloved Austria, Stefan Zweig began his autobiography with a suggestion from Shakespeare: “Meet the time as it seeks us.”

In our time – a time of conflicts, climate crisis and COVID-19 – there is simply no sustainable alternative to dialogue, international cooperation, and global solutions.

Question [translated from German]: You both mentioned the necessity of humanitarian and food supply corridors and the transport of goods. Can you tell us if there are any talks going on? Are you in personal contact by telephone with the Russian President? Where are talks being held and what can we expect for the future?

Secretary-General: After the evacuation of civilians from Mariupol Azovstal [plant], we are in contact with the Ukrainian and the Russian authorities, in order to multiply the initiatives similar to this. These contacts are going on. Our policy was, if you remember, we only announced each of the evacuations after it was completed. There have been many spoilers in relation to this issue and we will not be helping spoilers. We will do more operations of the same kind, I am sure, but we will keep them not public until they are completed, as we have done with the Mariupol operation.

And at the same time, I have been in intense contact both with the Russian Federation, with Ukraine, with Turkey, and with several other key countries, in order to try to address seriously the problems of food security.

But once again, I do not intend to make public any of the initiatives I am having until they produce a result, because if this becomes something to be discussed, globally, I am sure that we will not be able to achieve anything.

This is a main concern that I have now. And I have been in the last two weeks multiplying my contacts for this objective and we have a working group in the United Nations working hard to provide technical support to all the contacts I have been making.

If you want to solve a problem, you need to deal with those that cause the problem, or that can solve the problem. So, it makes full sense to talk to the leader of the Russian Federation, it makes full sense to talk to any other relevant actors in the present crisis. I believe these contacts have an important role in allowing us to understand motivations, objectives, and so to be more effective in our own initiatives.

We sometimes manage to have concrete results. And I think the civilians whose lives were rescued from the bunkers of Mariupol deserve that I meet anybody in any part of the world, without any doubt that that is the right thing to do. 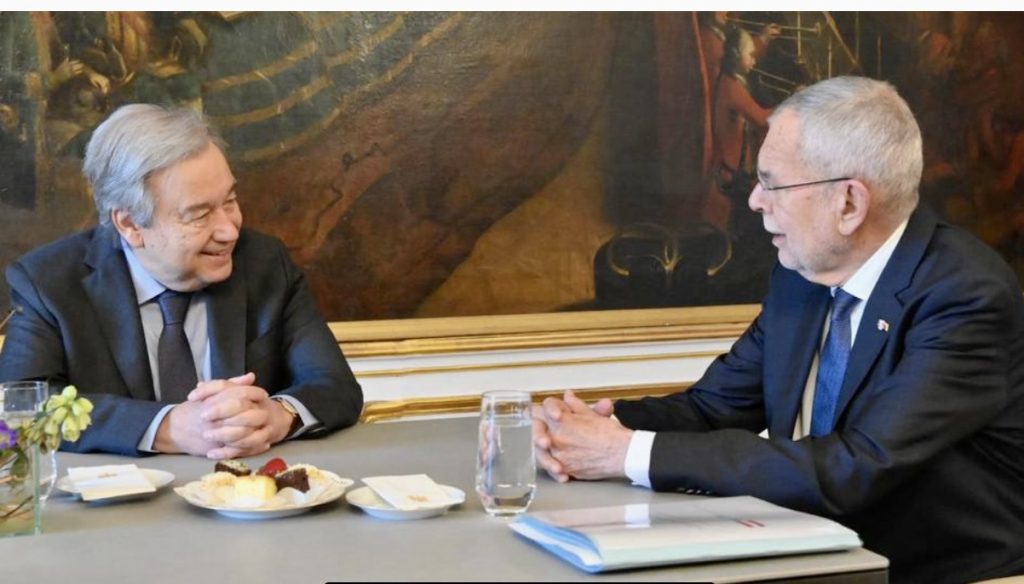