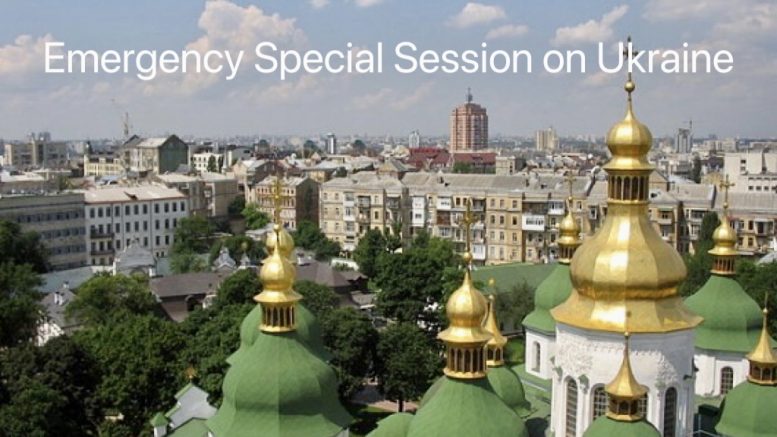 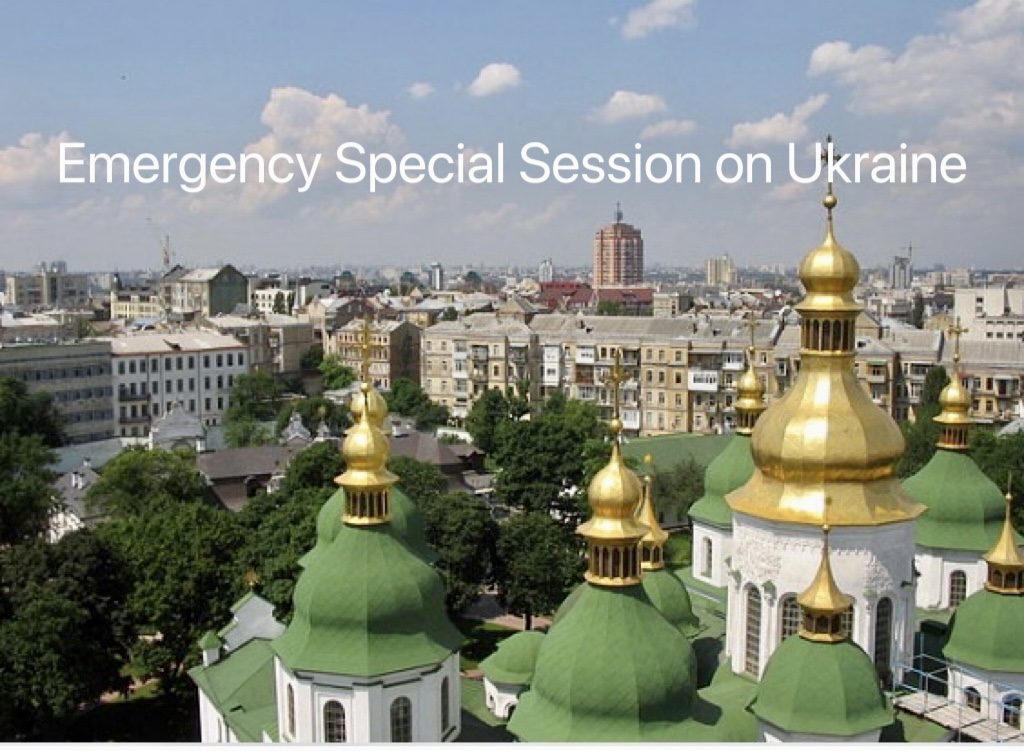 The fighting in Ukraine must stop.

It is raging across the country, from air, land and sea.

It must stop now.

The capital, Kyiv, is encircled from all sides.

In the face of the continuing attacks, Kyiv’s three million residents are being forced to seek safety in their homes, improvised bomb shelters, and in the city’s subways.

The Ukrainian government has distributed a meaningful number of arms to the population with the stated objective to participate in the defense of the country.

According to UNHCR, half a million of Ukrainians have already fled across the country’s borders.

This escalating violence — which is resulting in civilian deaths, including children – is totally unacceptable.

Soldiers need to move back to their barracks.

Leaders need to move to peace.

Civilians must be protected.

International humanitarian and human rights law must be upheld.

The sovereignty, independence and territorial integrity of Ukraine, within its internationally recognized borders, must be respected in line with the General Assembly resolutions.

We are facing a tragedy for Ukraine, but also a major regional crisis with potentially disastrous implications for us all.

Yesterday, Russian nuclear forces were put on high alert. This is a chilling development.

The mere idea of a nuclear conflict is simply inconceivable.

Nothing can justify the use of nuclear weapons.

We face what could easily become Europe’s worst humanitarian and refugee crisis in decades, with the numbers of refugees and internally displaced multiplying by the minute.

I am grateful for the compassion, generosity and solidarity of Ukraine’s neighbors who are taking in those seeking safety.

It is important that this solidarity is extended without any discrimination based on race, religion or ethnicity.

The neighboring countries will need all our support in the days and weeks to come. The United Nations will continue to assist with these efforts.

On Saturday, I spoke with President [Volodymyr] Zelenskyy and assured him that the United Nations would not abandon the Ukrainian people and conveyed our determination to enhance humanitarian assistance.

Even before the events of the past week, the United Nations was providing some 3 million people on both sides of the contact line with humanitarian assistance.

The United Nations is now working 24-7 to assess humanitarian needs and scale up the delivery of life-saving support to many more people desperate for protection and shelter — particularly women, children, elderly people and those with disabilities.

We are fully committed to staying and delivering for everyone affected by this deadly conflict across the country.

Some of our personnel are expanding existing programmes.

Others are preparing new operations to get help to those who need it, fast.

First, I have allocated $20 million from the Central Emergency Response Fund to support emergency operations along the contact line in the eastern oblasts of Donetska and Luhanska and in other parts of the country.

This will allow us to help more vulnerable people get the basics — shelter, food, water and health care as soon as possible.

Second, I have appointed Amin Awad as the UN Crisis Coordinator for Ukraine.

He will liaise with the Government and all relevant actors on the ground — supported by the Resident and Humanitarian Coordinator and the UN Country Team.

At the same time, we are bringing together partners, in and outside the country – and surging personnel into the country.

Third, tomorrow we will launch two coordinated emergency appeals for Ukraine and the region.

One that addresses escalating humanitarian needs inside the country – including rising internal displacement – and another that responds to the needs of people crossing international borders to seek refuge in countries neighboring Ukraine.

As we ramp up our efforts, it is essential that the safety and security of UN and associated personnel in Ukraine are protected, in accordance with international law, and that humanitarian access to vulnerable people and communities is guaranteed.

I call on all sides to uphold their obligations to allow freedom of movement of humanitarian personnel and to facilitate safe, rapid and unimpeded passage of humanitarian relief.

I also urge the international community to mobilize in support of our funding appeals to address the needs of all those displaced by this crisis, as well as other vulnerable groups, whose numbers will only grow as the fighting escalates.

But it is not a solution. It is simply treating the worst impacts of the conflict.

The only true solution is peace.

The attack on Ukraine challenges international law and the multilateral system rooted in the UN Charter.

Some of the possible consequences of a worsening conflict are terrifying to contemplate.

The latest security measures underline the high stakes for all.

The economic repercussions of the crisis will have widespread impact.

I count on every Member State to live up to the principles of the Charter.

The guns are talking now, but the path of dialogue must always remain open. It is never too late to engage in good-faith negotiations and to address all issues peacefully.

I hope that the direct talks now taking place between Ukrainian and Russian delegations will produce not only an immediate halt to the fighting, but also a path towards a diplomatic solution.

I welcome and encourage all peaceful efforts to end the bloodshed and halt this conflict.

I thank the countries who have offered to host and facilitate negotiations.

The United Nations is ready to support such efforts.

War is not the answer.

It is death, human suffering, senseless destruction and an immense distraction from the real challenges facing humanity.

The climate crisis and biodiversity loss; vitally needed socio-economic recovery from the pandemic; healing the divides of race and gender; and so many other pressing 21st century challenges.

Humanity cannot afford to be locked in a mindset that dredges up the worst of past centuries.

We need to look forward as United Nations to overcome the scourge of war.

We need to focus on solving problems, not making them worse.

In cities around the world, people are taking to the streets and demanding an end to war.

I believe people in the Russian Federation do, too.

We need peace now. Thank you.