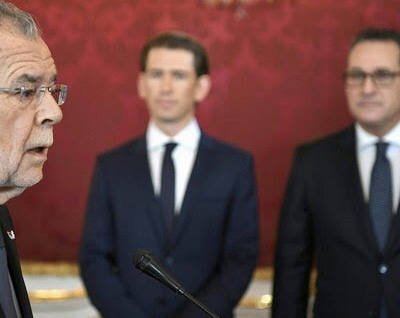 Today, Monday December 18th, the far right-wing government is sworn in by the green president in Vienna. A thick political cloud begins to hang over the social atmosphere in Austria. Read the insightful view by the Harvard-graduate, biologist Franz BeerFarmer.

During the first “real” world war, which heralded the demise of Europe as world colonial hegemon 100 years ago, the pacifist Austrian writer and journalist Karl Kraus wrote a theater play 10 full evenings long. The title of the play was “The last days of mankind”, the setting being Austria as micro-laboratory for the coming fundamental change and destruction of the global order.

His prophecy turned out to be true.

In 1918, the 1000-year-old monarchial imperial Austria disappeared. The United Kingdom passed her role as world´s main creditor to the United States of America.  And two thousand years of imperial China had just before (1912) given way to a new turbulent political order.

One hundred years later, in my eyes, we witness again in our now small laboratory Austria a fundamental change in Europa and a heralding of future times to come.

Mr. Kurz, the 31-year-old youth will be according to Euronews, the semi-official EU news channel, the youngest prime minister in today’s world. He will be sworn in by the only “green” president in the world. Both men were elected by majority in recent elections, although their parties were initially perceived as too small to win.

Evidence is, this “youngest and greenest” world record event will happen on Monday 18th in old Austria in the very center of Western Europe. In my view, these events are heralding the demise of the moderate parties who had been ruling in most Western European nations for 100 years now, except the fascist interlude 1925 to 1945. These two moderate parties were the Social Democrats and the Christian Socialists’ mass-organizations.

They give way to a trend, a trend of more extremes now. Not only to far right, but also to somebody like young president Mr. Macron, who did rise as phoenix from the ashes of the Social Democratic Party of France, which vanished.

Why is this happening? At the root of the problem lies — and in this I agree with the Rightists’ diagnosis — the way how the European Union, especially its Euro-Zone-Fraction, is functioning. It lacks control by the public. It lacks transparency. The major currency decisions within the Euro-Zone have been made by an officially “informal” round of finance ministers, the “Euro-Group”, where no protocols are officially available to the participating decision makers, as a recent publication of one prominent whistle-blower has clarified.

At the same time, global companies and their highly-paid lobbying agents enjoy much influence on the bureaucratic machinery of the Eurocrats in Brussels. This is the view shared by the far-Rightists, the Greens as well as the far-Leftists.

The moderate parties in the center, in power over 50 years now, did not make enough noise to stop this form of lobby-corporatism on time. And the European Parliament has still nearly no real power. All of this creates a climate of helplessness, when most important laws and policies for the EU states are “Made in Brussels”, yet little can be done to influence it.

EU citizens get disappointed, especially when they finally realize that over the course of last 25 years, little economic welfare has ever been delivered to them.

Very few beggars were seen in the cities of Austria before 1995, the year it joined the EU. But soon after the accession of the former socialist countries around southeast of Austria, beggars started to flock at the entrances of supermarkets even in small provincial towns. When speaking, they will tell you that they are from Romania, Bulgaria, or Slovakia. All those countries are EU-members. The numbers of beggars seem ever to increase. Indeed, a recent official EU statistics report shows, the states in the EU are not converging in their economic prosperity. The divergence has given the beggars reasons to come.

So it seems everybody agrees that the rich get richer in Europa, be it families within the nations and nations among the EU. The average income level is 600% higher in Austria than in Romania, both being the EU nations in Central Europe. The sharp difference is not improving.

Such harsh macroeconomic realities are visible to all ordinary people when going for shopping. Meeting with the invitation of German elites, represented 2015 by Chancellor Merkel and Daimler (Merceds Benz) CEO Zetsche, hundreds of thousands of Middle East and Asian war refugees came to Germany, working in factories and living next doors, many locals did get upset, stirred by the unsafe feelings.

As refugees, the immigrants are entitled to alimentation and housing by the state. The living standard is thus at a similar level to the growing number of poor families, who have worked their whole lives yet are unable to make a decent living in the rich Germany or Austria. This way, the fertile ground for the rise of Mr. Kurz (conservative centrist) and  Mr. Strache (far-right) had been gradually and logically prepared, both promising to close borders and to keep refugees at a minimum.

A far-right government being a threatening phenomenon, the unfortunate mismanagement of the Euro, however, is much of the root of the problem, leading to economic divergence and imbalance within the Euro-Zone. We can watch now in the Austrian laboratory if the new right-wing-conservative government will, after all, address the core of the problem to the political power centers in Brussels. If not, does it make sense to only tackle the symptoms locally in Austria? Or what does the latter lead to?  We may as well keep you updated on the experiment.

Be the first to comment on "A View from the Inside"