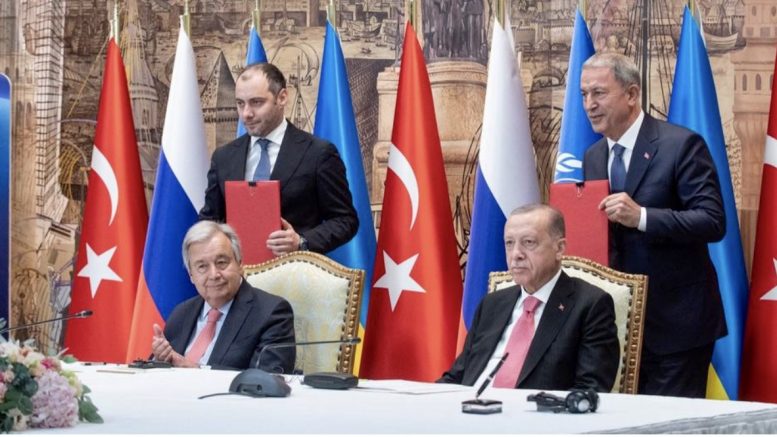 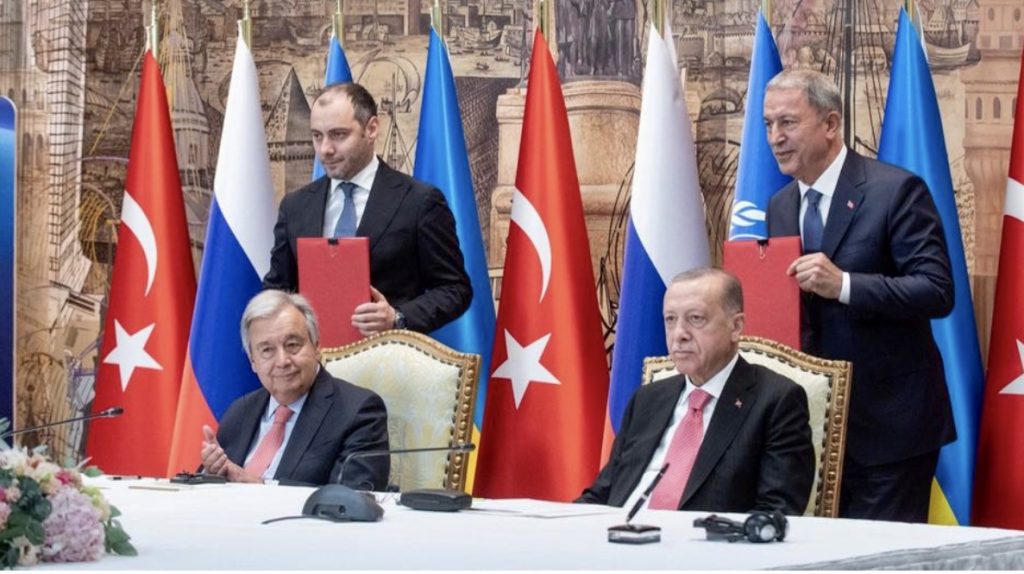 Yesterday, 22 July 2022, the UN Secretary-General António Guterres held a speech in Istanbul at the signing of the Black Sea grain exports agreement:

Today, there is a beacon on the Black Sea.

I want to recognize and thank all those who helped make it happen.

To our hosts, President Erdoğan and the government of Türkiye:

Your facilitation and persistence have been essential through every step of this process.

To the representatives of the Russian Federation and Ukraine:

You have overcome obstacles and put aside differences to pave the way for an initiative that will serve the common interests of all.

Promoting the welfare of humanity has been the driving force of these talks.

The question has not been what is good for one side or the other.

The focus has been on what matters most for the people of our world.

And let there be no doubt – this is an agreement for the world.

And it will help stabilize global food prices which were already at record levels even before the war – a true nightmare for developing countries.

Specifically, the initiative we just signed opens a path for significant volumes of commercial food exports from three key Ukrainian ports in the Black Sea – Odesa, Chernomorsk and Yuzhny.

The shipment of grain and food stocks into world markets will help bridge the global food supply gap and reduce pressure on high prices.

This agreement did not come easy.

Since the war started, I have been highlighting that there is no solution to the global food crisis without ensuring full global access to Ukraine’s food products and Russian food and fertilizers.

Today we took important steps to achieve this objective.

But it has been a long road.

In April, after being received by President Erdoğan, I met with President Putin and President Zelenskyy to propose a plan for solutions.

We have been working every day since.

It took immense efforts and commitment by all sides and weeks of around-the-clock negotiations.

That commitment and dedication are even more vital today.

This initiative must be fully implemented, because the world so desperately needs it to tackle the global food crisis.

We count on the government of Türkiye to maintain its critical role going forward.

I am here to pledge the full commitment of the United Nations.

We will remain closely involved in working for the agreement’s success.

We are ramping up efforts to ensure the UN is positioned to deliver on its commitments.

I am grateful for the work of the two UN Task Forces that developed a parallel, coherent and coordinated approach.

One led by Martin Griffiths — Under-Secretary-General for Humanitarian Affairs and including the International Maritime Organization – focused on the shipment of Ukrainian grain through the Black Sea.

Today, we are announcing the establishment of a Joint Coordination Centre to monitor implementation of the Black Sea initiative.

The other Task Force led by Rebeca Grynspan — Secretary-General of UNCTAD – centred on facilitating the unimpeded access to food and fertilizers originating in the Russian Federation to global markets – and it also resulted in an agreement.

I urge all sides to spare no effort to implement their commitments.

We must also spare no effort for peace.

This is an unprecedented agreement between two parties engaged in bloody conflict.

But that conflict continues.

People are dying every day.

Fighting is raging every day.

The beacon of hope on the Black Sea is shining bright today, thanks to the collective efforts of so many.

In these trying and turbulent times for the region and our globe, let that beacon guide the way towards easing human suffering and securing peace.