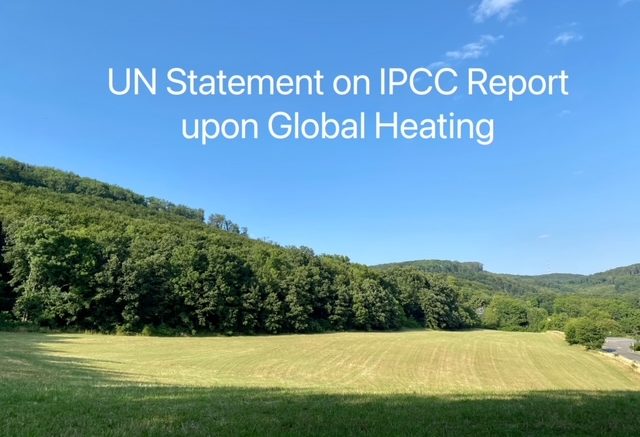 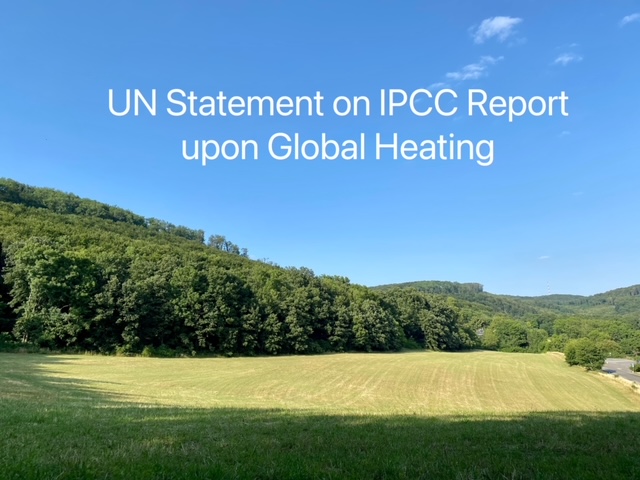 On 9. August 2021, The UN Secretary-General António Guterres made a statement on the IPCC working group I report on the physical science basis of the sixth assessment:

Today’s IPCC Working Group 1 Report is a code red for humanity.  The alarm bells are deafening, and the evidence is irrefutable:  greenhouse gas emissions from fossil fuel burning and deforestation are choking our planet and putting billions of people at immediate risk.  Global heating is affecting every region on Earth, with many of the changes becoming irreversible.

The internationally agreed threshold of 1.5 degrees Celsius is perilously close.

We are at imminent risk of hitting 1.5 degrees in the near term. The only way to prevent exceeding this threshold is by urgently stepping up our efforts, and pursuing the most ambitious path.

We must act decisively now to keep 1.5 alive.

We are already at 1.2 degrees and rising. Warming has accelerated in recent decades. Every fraction of a degree counts. Greenhouse gas concentrations are at record levels.  Extreme weather and climate disasters are increasing in frequency and intensity.  That is why this year’s United Nations climate conference in Glasgow is so important.

The viability of our societies depends on leaders from government, business        and civil society uniting behind policies, actions and investments that will limit temperature rise to 1.5 degrees Celsius.  We owe this to the entire human family, especially the poorest and most vulnerable communities and nations that are the hardest hit despite being least responsible for today’s climate emergency.

The solutions are clear.  Inclusive and green economies, prosperity, cleaner air and better health are possible for all if we respond to this crisis with solidarity and courage.  All nations, especially the G20 and other major emitters, need to join the net zero emissions coalition and reinforce their commitments with credible, concrete and enhanced Nationally Determined Contributions and policies before COP26 in Glasgow.

We need immediate action on energy. Without deep carbon pollution cuts now, the 1.5-degree goal will fall quickly out of reach. This report must sound a death knell for coal and fossil fuels, before they destroy our planet.  There must be no new coal plants built after 2021.  OECD countries must phase out existing coal by 2030, with all others following suit by 2040.  Countries should also end all new fossil fuel exploration and production, and shift fossil    fuel subsidies into renewable energy.  By 2030, solar and wind capacity should quadruple and renewable energy investments should triple to maintain a net zero trajectory by mid-century.

Climate impacts will undoubtedly worsen.  There is a clear moral and economic imperative to protect the lives and livelihoods of those on the front lines of the climate crisis.  Adaptation and resilience finance must cease being the neglected half of the climate equation.  Only 21 per cent of climate support is directed towards adaptation.  I again call on donors and the multilateral development   banks to allocate at least 50 per cent of all public climate finance to protecting people, especially women and vulnerable groups.  COVID-19 recovery spending must be aligned with the goals of the Paris Agreement.  And the decade-old promise to mobilize $100 billion annually to support mitigation and adaptation in developing countries must be met.

The climate crisis poses enormous financial risk to investment managers, asset owners, and businesses.  These risks should be measured, disclosed and mitigated.  I am asking corporate leaders to support a minimum international carbon price and align their portfolios with the Paris Agreement.  The public and private sector must work together to ensure a just and rapid transformation to a net zero global economy

If we combine forces now, we can avert climate catastrophe.  But, as today’s report makes clear, there is no time for delay and no room for excuses.  I count on government leaders and all stakeholders to ensure COP26 is a success. (UNIV)