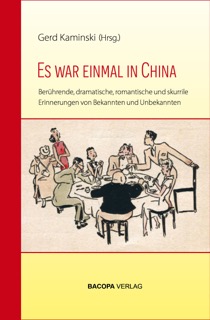 “Once upon a time in China”: memories from acquaintances and strangers, touching, dramatic, romantic and bizarre…

On the occasion of the 50th anniversary of the Austro-Chinese diplomatic relations 1971-2021, we’d like to recommend this fascinating new book by BACOPA to you with the original title of “Es war einmal in China”.

Words by Prof. Kaminski as Editor:

It was the idea of ​​the publisher Walter Fehlinger to bring out an anthology on the occasion of the 50th anniversary of the Austrian-Chinese diplomatic relations. This is another step in a direction where Walter Fehlinger and his wife Regina have been heading for a long time. Tirelessly, in good times as well as in bad and even now under Corona, they strive to build literarily bridges between the German-speaking areas and China.

It seems to me that they have chosen the Chinese proverb as their life’s work: “Opening a book is more valuable than a measure of jade”. In this way we open to our advantage those books you have published written by Austrian, German and Chinese authors, in admiration of the remarkable generosity with which Walter and Regina Fehlinger enable the printing of books without, as is usual in the industry, asking about the possible profit.

I hope that this carefully compiled work will receive enough attention from open-minded readers, and that the trust of publishers in this country find its justification in this project. I also hope that the edition hopefully published in Chinese will get the attention of China’s readers and show them that, despite the great distance, there are people who feel connected to China and its people, and have gladly kept in their memories special experiences that they were able to experience there.

The authors of this anthology come from different times, professional and social backgrounds. The kaleidoscope that is put together in these pages testifies to the diversity of the ways in which one can approach China. They are important personalities in public life, diplomacy, business, recognized writers and journalists, important personalities in science and great artists, but also people whose names are not known from the media, who thankfully give this kaleidoscope color and luminosity.

You have all contributed to the fact that, after reading the work, the old Chinese wisdom will be confirmed hopefully:

(“Books are like rivers that can take the reader in all directions.”)

May “Once Upon a Time in China” bring sympathy and friendship from Austria to China and from China to Austria!

Arthur von Rosthorn: Adventures in Ancient China and From the Memoirs of the k.u.k. Envoy;

Hans H. Hajek: An ascent of Mount Omei, Szetschuan in the thirties;

Friedrich Schiff: “If you want to paint a portrait of this city …”;

Wilhelm Deman: “Shanghai 1939-1949”: After arrival. From the manuscript of the Austrian emigrant from Shanghai;

Alfred W. Kneucker: Arthur had a vision. From the manuscript of the autobiographical novel “The City Above the Sea”;

Heinrich Jettmar: “Mao was very patronizing towards me and my intentions”. From the China diary of an Austrian plague doctor;

Walter Freudmann: As if they had waited long and hard for me. Memory of China;

Gustav Meng: I was a barefoot doctor on the Leizhou Peninsula, China;

Hans Thalberg: As the first Austrian ambassador to the PR China;

Ilse Leitenberger: The Chinese age is dawning: observations and conclusions after a first Chinese “local inspection”;

Kurt Seinitz: 25-year-old long nose with a dive into the Middle Kingdom;

Heinz Nussbaumer: “We’re almost neighbors!” As an Austrian looking for traces in the People’s Republic of China;

Gerd Kaminski: “You eat beef and yet you are old and sick”. Memories of China and the importance of food;

Hugo Portisch: Three times China; Gerhard Amanshauser: What struck me pleasantly about the Chinese was the traditional restraint and restraint. Excerpt from the diary China 1983;

Margit Fischer: Seeing once is better than hearing 100 times;

Fritz Moravec: To Kailash, the most sacred mountain in the world;

Gertrude and Karl Ölmüller: By bike from Kathmandu to Lhasa;

Nikolai Herold: My impressions in Beijing. It does not matter how slowly you go as long as you do not stop;

Gerd Kaminski: “These foreigners are different from us”. Episodes of a love story;

Ordering of the Book:

Postage-free delivery in Austria and to Germany