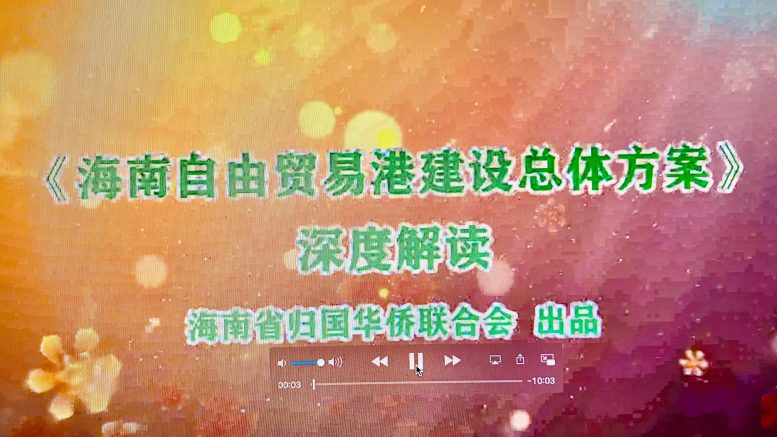 The “Finanzen” platform in Austria published an article from SCIO concerning the press conference held on 12, April about the Hainan Free Trade Port (FTP). In this context, we’d like to share a short video with the reader about Hainan FTP here. The video talked about Hainan FTP’s system design and its concrete measures. For those who’d like to know more about this potentially huge open market, the video offers a good window into the garden of Hainan story.

As is stated by the “Finanzen” reporting on the press conference, there has been an explosive growth in foreign investment over the past three years thanks to Hainan’s favourable policies.

Feng Fei, governor of Hainan province, made the following remarks at the press conference:

The explosive growth in foreign investment over the past three years has become a highlight in the construction of the Hainan Free Trade Port. Specifically, he explained this through exponential growths in three areas.

First, Hainan’s actual use of foreign capital doubled annually for three years in a row, with the aggregate exceeding half of what the island province had accumulated over 30 years since it became a special economic zone in 1988.

Second, the number of foreign investment entities grew exponentially. The number of newly established foreign-invested companies in Hainan reached 1,005 last year, surpassing the 1,000 mark and nearly tripling that of 2019. Keep in mind that last year was severely impacted by the pandemic, so it was quite a hard-earned achievement.

Third, the number of sources of foreign investment grew exponentially. Over 80 countries and regions, including Russia, have invested here.

Feng Fei used two “lowest” to sum up its favorable policies to explain why Hainan has become a favored place for global investment.

Second, the lowest taxes. What foreign-invested companies care most about is, for example, the corporate income tax. Companies in industries encouraged by Hainan enjoy a corporate income tax rate of 15%. High-end talents pay income tax no higher than 15% of their gross income. These two policies are exclusive to Hainan.

Be the first to comment on "Video: Big Design of Hainan Free Trade Port"