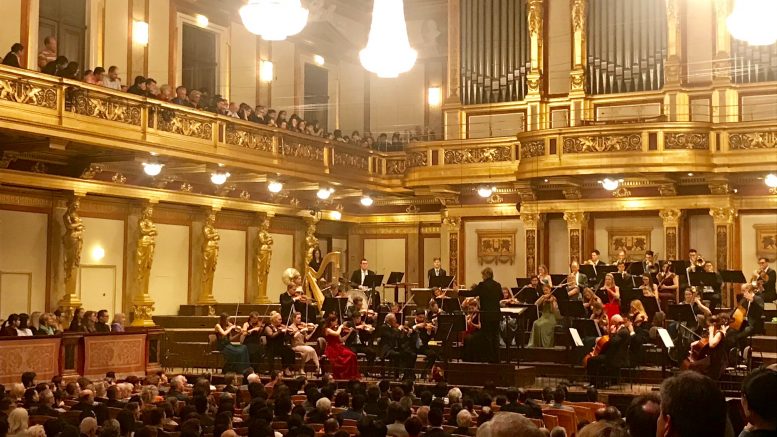 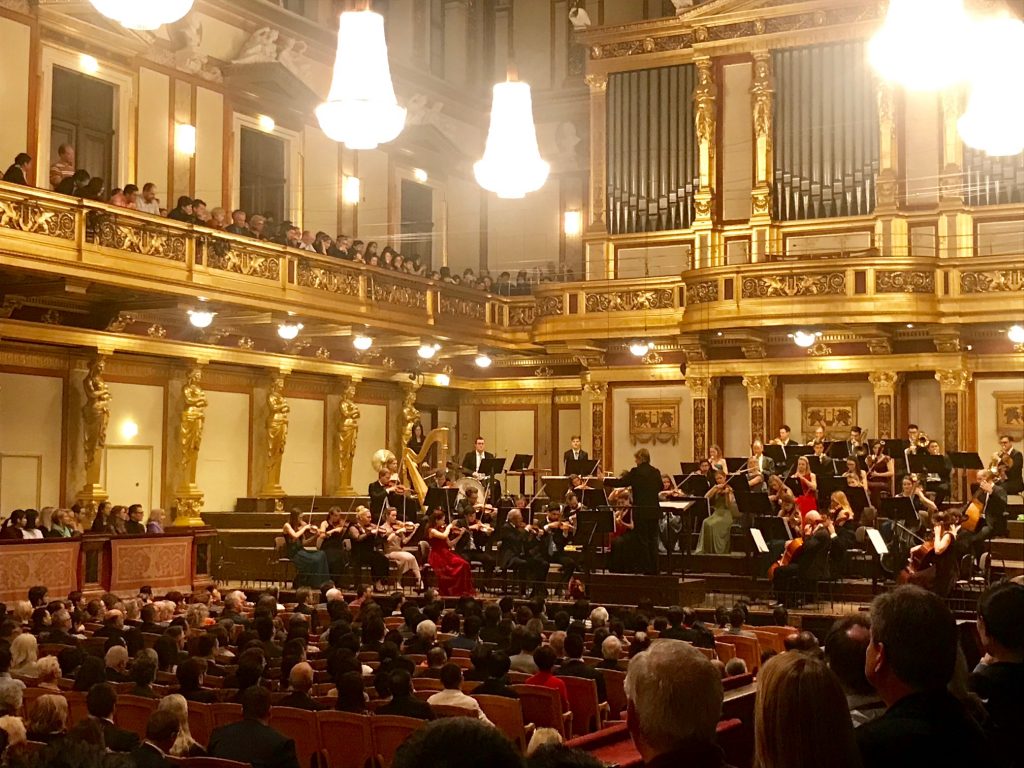 On the evening of February 3, the Golden Hall of the Vienna Musicians Association Mansion held a “Vienna Sound of Spring Concert”, in which three Chinese classics were introduced between the traditional Waltz pieces. As a result, the concert turned beautifully into a gift from Austrian musicians to the Chinese Lunar New Year. That night, 2 days before the beginning of the Year of the Pig, the Golden Hall was almost wholly packed, leaving no room in the standing-tickets area either. An emotional evening enshrouded in joy, indeed. 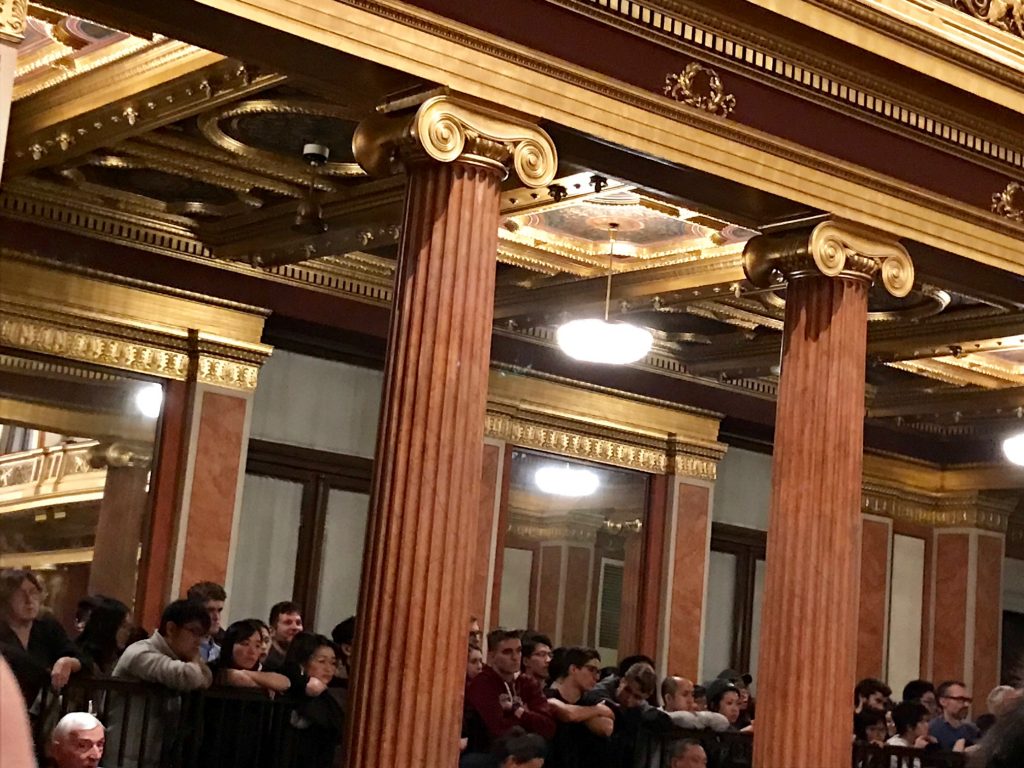 The novel, unique concert was conducted by Friedrich Pfeiffer, starring the Philharmonic Generations Vienna. This orchestra was founded in 2018 with  veterans retired from the famous Vienna Philharmonic Orchestra, including Friedrich Pfeiffer, Günter Seifert, Eckhard Seifert, Hans P. Ochsenhofer, Franz Bartolomey, Johann Hindler, Wolfgang Tomböck and Manfred Hecking. Unwilling to be sitting around in retirement, these first-class veteran musicians are determined to continue their passion for music. Together with outstanding young musicians, they return to the stage. The Philharmonic Generations Vienna, a solid new orchestra, has thus come into being. 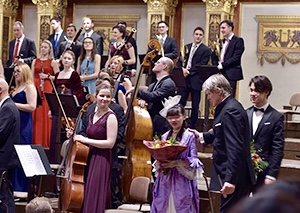 The second highlight is the appearance of two young soloists, Yang Ning (13 years old) from Macau and Vincent Jiang Gatke (18 years old) from Vienna. The former played the First Movement of Mozart’s Piano Concerto in d Minor, while the latter Beethoven’s First Piano Concerto in C Major. From the pure, clear tone to the fascinating personal style, the two young people gave the audience a big surprise.

I’m informed that Vincent Jiang Gatke, one of the two young soloists, is recommended by the Organizing Committee of the Vienna Mozart International Piano Competition. His convincing performance that night became the best advertisement for the competition, which is a project launched by the Alumni Association of International Graduates and Musicians of the Music and Art Institutions in Vienna. For two years, many hidden pearls have been found through the competition. Yang Ning, by all means a growing star, is recommended by the International Cultural and Art Festival of the Silk Road Economic Belt. 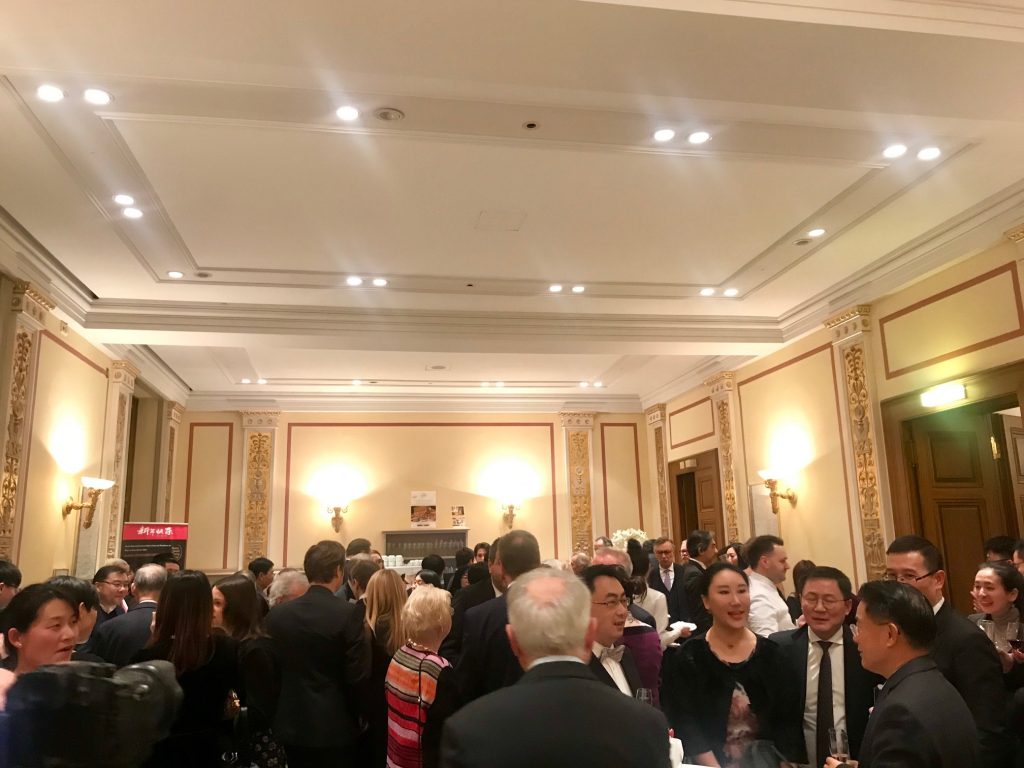 The concert is an obvious success. From the perspective of the orchestra’s playing, the conductor Pfeiffer adheres to the charm and elegance of the Viennese style. At the same time, he subtly weakens the unique „dragging“ effect of the Viennese-styled Waltz, shaping the evening atmosphere into a more natural and pleasant one. Mr. Pfeiffer’s body language is gorgeous, both gentle and exhilarating, displaying a good understanding with the orchestra while offering the audience a music evening probably only found in Vienna.

As the moderator for the after-concert cocktail party that night, I asked Mr. Pfeiffer if he ever found it difficult to direct the Chinese music. Mr. Pfeiffer replied without hesitation: “No, from melody to tone, from speed to rhythm, everything is absolutely clear!” 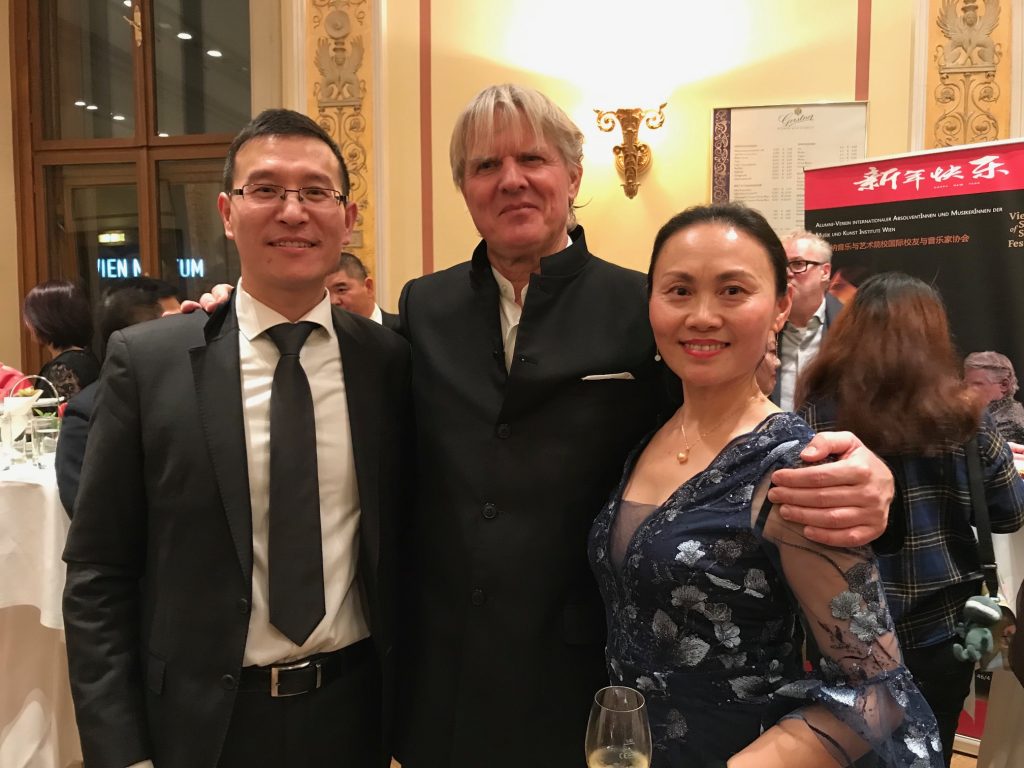 Due to different traditions and mentalities, Westerners’ interpretation of Chinese classics are often perceived by Chinese listeners as lacking correct emotional communication. Take the well-known piece “Red Flag” as an example. The Austrian musicians once played it. The texture is transparent, the tone beautiful. And the different instruments of the orchestra show distinct features like clear streams converging into a big river. Musically, the performance is intact and flawless. But the Chinese audience thinks that the interpretation lacks power in speed, and is not magnificent enough to show the necessary enthuisiasm. They are more willing to hear the sound of a big river swallowing all the creeks, even if at the cost of the latter’s distinct colors.

Mr. Pfeiffer’s implementation of the Chinese pieces that night, though, is very well-done. Achieving musical perfection, the moods conveyed are also quite in place., i.g. the joyful celebration of “Spring Festival Overture” and ” Good News from Beijing to the Border Village”, and the invincible spirit of “Journey to the West”. Perhaps the music experts from China that evening contributed to the wonderful result. 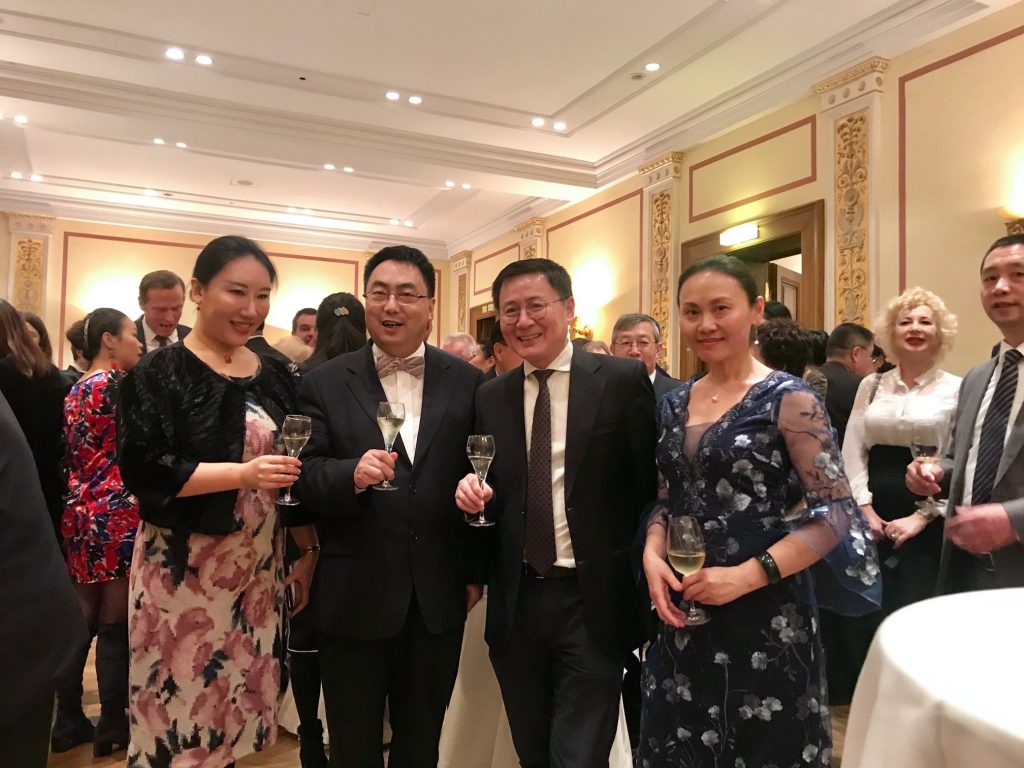 The evening of February 3rd, 2019 is hopefull a new beginning of the Golden Hall’s image in China. Instead of being given free tickets to go to the venue for some kind of propaganda, Chinese compatriots pay for their entrance tickets that evening in order to listen to a high-leveled concert dedicated to the Chinese New Year. They celebrate their festive season in this way with the Viennese together. I once wrote an article for the sake of the Golden Hall, hoping that some folks should not mistaken the Golden Hall, a sacred place for classic music, for a hypermarket. The Golden Hall has always been the spiritual home of world-class orchestras and conductors in the past centuries. This should be beyond doubt in the heart of the Chinese people. 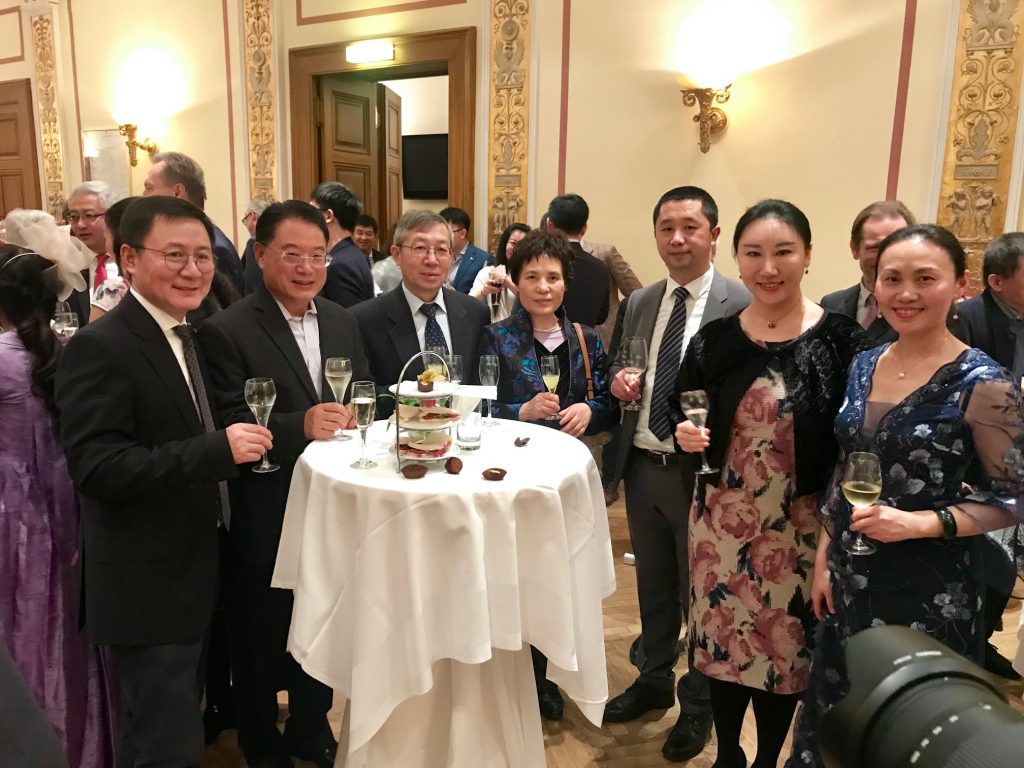 At the reception, I had the honour of exchanging views, suggestions and ideas on the concert with Mr. Li Yong, Director-General of the United Nations Industrial Development Organization, Mr. Wang Qun, Permanent Representative of China to the United Nations and other International Organizations, and Mr. Gao Xingle, Commercial Counselor of the Chinese Embassy in Austria. They praised the concert and considered it to be “innovative”, unprecedented in history and a way to understand the Golden Hall better. May the Vienna Sound of Spring Concert, as Mr. Li Yong said, be like a thriving seedling, growing year after year into a strong and towering tree! 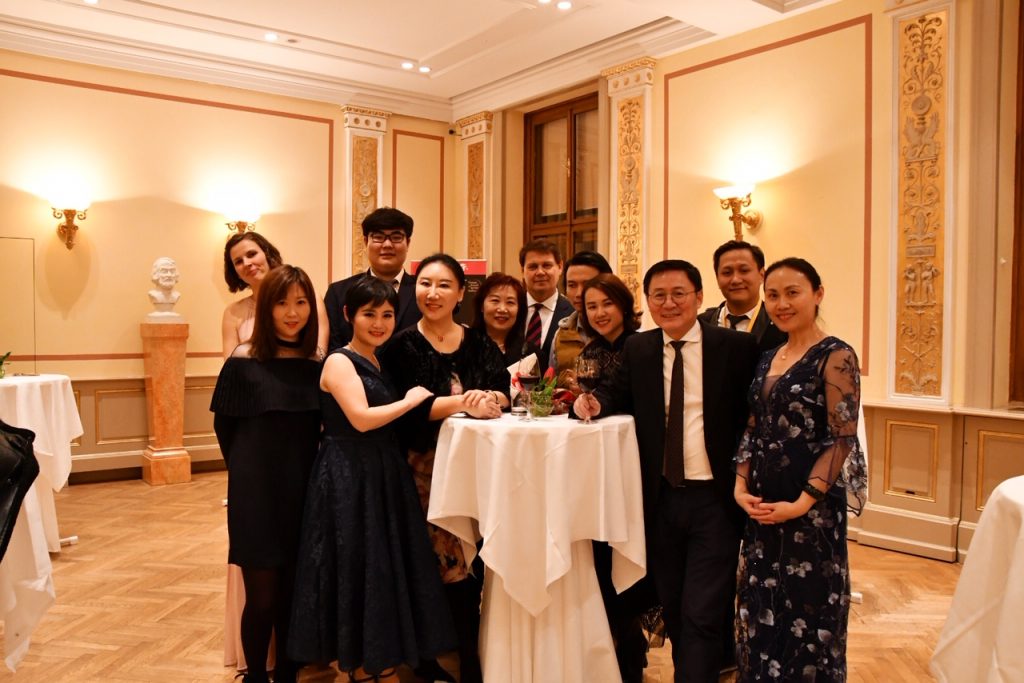