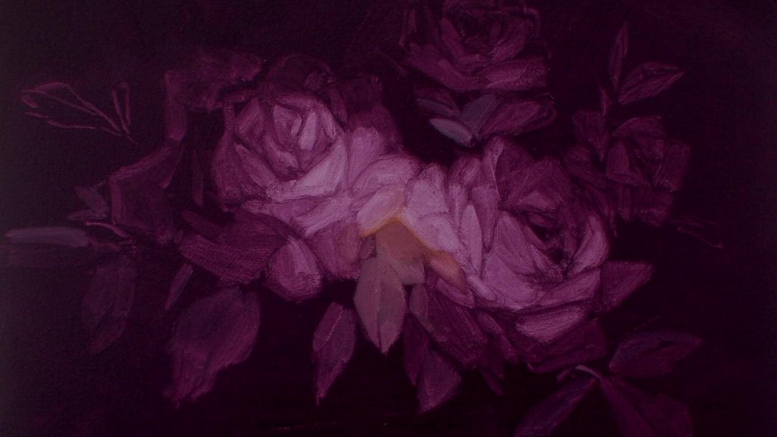 “… For beauty is only a step removed from a burning terror we barely sustain, and we worship it for the graceful sublimity with which it disdains to consume us.”

Born in Austria in 1980, Bianca Regl lives in Beijing since 2010. In her prior years she spent time in Los Angeles and Berlin. The theme of her paintings was, and is, the (picturesque) localization. Terms such as ‘homeland’ and ‘tradition’ face others, like ‘emigration’ and ‘hyper culturalism’.

François Jullien writes that coming across China means compiling a sloping and strategic access that makes us grasp European thinking from its flip side, where the “unthought-of” lies. The “in-between” has the characteristic of going unnoticed; it slips away from the question of “being”, of which philosophy has been articulated since the Greeks. A reference to this can, for example, be found in the title of the exhibition “Between the Apple and the Plate”. It is a citation of Georges Braque, who believes that when painting, one should concentrate on what happens between the apple and the plate. In this way, the title can also be perceived as a reference to Jullien.

Out of the different options for a pictorial adoption of reality, Bianca Regl has, despite her consistent visual concepts, chosen stylistic diversity. The outcome varies in her procedures and is not necessarily clear from time to time.  To the artist all are equal; all the processes are relevant to the understanding of her work.

Far from any kind of arbitrariness, Bianca Regl understands (the painting of our) our time as one that emerges out of set pieces, resulting in an accumulation of a singular influence. As Žižek says about Borges, a truly grand literary figure will himself generate his past, making events function retroactively. Regl, too, selects influences out of art history that, through this selection, turn linear.

Wallpaper patterns from the Baroque period to the modern era, folds of curtains that she  accurately researched  in the representations of old masters,  is implemented in quotations, all play a role in Chinese cultural theory. The portray concepts of the Italian Renaissance, or reflections of palm trees in Californian swimming pools.

In her usual perfectionist, way the realization through painting is carried out under high formal standards. This made her works cause a stir in her early years at the Academy of Fine Arts in Vienna.

The technical foundation for all of Regl’s works exhibits articulately interwoven color values within the meaning of “harmonie générale”, developed by the impressionists. Her works from the last few years are constructed by means of exact tonal curves, assembled in order to have their precise color values.  Like the painters of the modernist era, Regl’s attitude towards color on the palette has a greater importance than the study of nature. In recent years she has established an appreciation for the development for new colors in the application of her paint, one that generates alterations from color of the object, towards color of the picture, ranging from the light-dark Chiaroscuro stylization, all which has moved towards more differentiated tonal studies. Furthermore, the concentration of the painter lies within the material, which is oil-paint, one that demands maximum agility from the artist.

Regl chooses a particular approach according to the effect that is to be achieved in the painting. The pondering continues until the right balance is found. Nevertheless, every single work is clearly identifiable as one of Bianca Regl’s paintings.

Work from the series titled “Folds“, delivers the sought-after basis for the transition from representational works to ornaments, created by the use of stencils and techniques, developed simultaneously in the last few years.

In the realization of the ornamental works, Regl’s vision is directed towards ruthlessly reduced means. Similar to Chinese ink painting, there is no direct focus. Nevertheless, in the series such as “Untitled (Points of Passage 1-6) “ or “Untitled (Brocade)”, Regl works along the lines of western notions of decorative beauty. Where coloring turns into luxurious brocade, transforming into alluring velvet velour showcasing the magnificent boundlessness of her works.

This context is situated against the backdrop of her current studio, positioned in an unkempt suburban art district of Beijing; amidst burning landfills, obviously a place far from Renaissance and Neo-Classical ideals. This is precisely the reason why it serves the purpose as a stage for such curlicue endeavors.

The still compositions of the paintings thus stick to western ornamental art and simultaneously point towards Chinese features of calmness. In paintings like “Waterfall I” and “Waterfall II” this interlacing becomes particularly apparent.

The series “Stucco” furthermore refers to an understanding of time. Citations from art history and pop music are piled up into plastering imitations by the bored movements from the hand of a cake decorator.

1 Comment on "BIANCA REGL: ​BETWEEN THE APPLE AND THE PLATE"